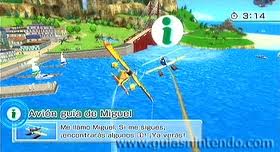 Miguel is a Mii character from Wii Sports Resort and Pilotwings Resort. He is a resident of Wuhu Island. He operates a flight based tour of the island from his guide plane. In the game's Island Flyover mode, the player can follow him to be led to several "I points" on the island.

Pilotwings Resort(Before i Point): "You can have my iRing if you follow me for 15 seconds!"

Pilotwings Resort(After i Point): "You got my iRing! See you around!"

Retrieved from "https://wuhupedia.fandom.com/wiki/Miguel?oldid=4411"
Community content is available under CC-BY-SA unless otherwise noted.